Via Ferrata in the French Alps 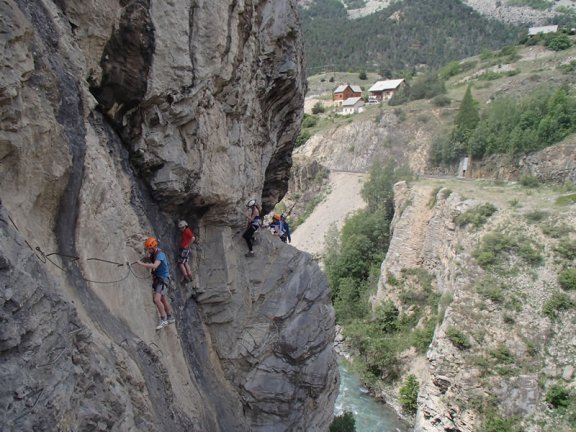 Via Ferrata are a series of metal ladders, holds and rails fixed into cliffs and rock faces following a set route. There is a cable or 'life line' alongside the route which you clip into for safety.

The first via ferrata in France was constructed in the Hautes Alpes in Freissinières in 1988 ( 15 mins drive from Alpbase!) and now there are well over twenty within a 30 minute drive of Vallouise and over a hundred routes in the Alps. Some via ferratas now also have monkey bridges and big zip lines to add to the fun! The closest to us being just 5 minutes away by car “ Les Gorge de la Durance”.!

Ferrata are great fun - somewhere between scrambling and climbing. However you do not need any experience apart from a basic introduction.

Anyone from the age of about 5 can participate, and its a great family activity. teenagers love them! If you have never done a via ferrata, click on the notes tap for a description.

Because we have 10 via ferratas within 10 mins drive and 10 more within 30 mins drive.

If you have never done a via ferrata before, or are planning on taking your children for the first time, it is advisable to go with a professional guide who will explain how to manipulate the equipment safely and correctly and give you tips on climbing and doing the via ferrata.

If you are unsure how you or your children react to heights, it is a good idea to do a high ropes adventure first, and we have one locally in Puy Saint Vincent. This will also familiarise you and your child with using a harness and for the high ropes course, also the cows tails.

Via ferratas are graded according to difficulty and the majority are aimed at adults. The main inconvenience of this for younger children is that the holds will be positioned for an average adult height so even if it is an easy grade, it might still be very challenging for a small person! For teenagers this is less of a problem so they can enter into the normal grading system, starting off with an easy one and progressing gradually.

The easiest is PD (Peu Difficile - 'a little difficult') and the hardest is ED (Extrèmement Difficile - 'extremely difficult'). The difference is to do with the physical difficulty (ie more overhanging is more physically draining) and also how 'scary' it is - as in height, exposure and some have obstacles such as monkey bridges.

For younger children, we have some via ferratas that have been designed specifically with children in mind. These have lower holds and ladders spaced more appropriately for children. In general, it is advisable that children are a minimum of age 5 before they try out a children's via ferrata but it very much depends on the child.

Local via ferratas designed specifically for children are:

So the grades (“cotations”) in use in France, in rising order of difficulty, are:

These grades may be modified with a “+” or a “-” to indicate that they are at the top or bottom end of the grade respectively.

The following is our list of recommended Via Ferrata close to AlpBase. You can find them all listed in the free Via Ferrata and Canyoning guide to the Ecrins Massif available at Kings in Vallouise La Casse (10% discount for AlpBase clients) or any other outdoor equipment shop in the area. The latest brochures contain all 16 of the Via Ferrata routes and the 5 canyons in the Ecrins Massif.

F (Facile) = Easy, for adult beginners but NOT necessarily for children. Child-friendly routes are marked as such

D (Difficile) = Difficult with some long steep sections, and exposure

Total duration up and down: 4.30 hours

Season Guide: May to October

A superb day out. The start is 50 minutes from AlpBase. Drive to Briançon and then take signs to Grenoble (Col du Lautaret). 15 minutes after Briançon you come to Pont de L’Alpe in a bend in the road. Park here and take the big footpath up to the chalets at L’Alpe du Lauzet. Just after these buildings strike up and right and take the signed path that leads to the Via Ferrata. You climb up fairly steeply and then traverse right across the Aiguillette du Lauzet, passing through a cave en route. 10 minutes after this cave you come to some grassy sections where you should see Edelweiss from the 3rd week of July for approx. 1 month. Please don’t pick these wild and rare alpine flowers, they are protected. Look out for Ibex and chamois. The summit is a real isolated rock tower with superb views looking south to the Ecrins Massif. Descend via an obvious scrambly and initially quite steep footpath that leads down and round all the way back to the start of the route at the little restaurant at L’Alpe du Lauzet. Look out for marmots on the way down.

This is THE Grib Goch of the Ecrins! A short telesiege takes you to within a 40 minute hike of a mountain ridge over 1km in length. It is north facing so cool in summer, and is loved by those into scrambling.

Tips: Be aware that the telesiege is only open in high season from 09.00 to 17.30 hours. Look out for the scary chasm at mid height!

Total duration up and down: From 1.30hrs to 3.30 hrs. depending on route chosen

Distance from Alpbase.com: 10 minutes’ drive. From Vallouise continue up through Pelvoux towards Ailefroide. After a short drive you will come to a small 30m. tunnel. Park on the left and look for the big Via Ferrata sign the Vallouise side of this tunnel. The first section is great for children at 1.30m height or taller.

Total duration up and down: From 1.30hrs to 4.5 hrs depending on route chosen

Difficulty: F to TD depending on route chosen

Distance from Alpbase.com: 15 minutes drive
A fantastic voyage into the huge Durance gorge with aerial walkways, tyrolean bridge swings and great views. Take the obvious “Via Ferrata” signs one kilometer above L’Argentiere on your left as you descend the road from Vallouise to L’Argentiere. There are three routes:

The Green: Easy introduction to VF. For children from age 6 upwards. Good for adult beginners also

The Red: Proper steep VF. Includes a steep wall. Great views. From the top you can walk across to the top bridge above the Gorge, traverse it and descend back down to the car park at the bottom by walking through La Batie housing estate – signposted.

The Black: The hardest VF involving all the bridges in the Gorge.

Total duration up and down: 2.30hrs

Distance from Alpbase.com: 10 minutes drive
Great for families with children between 6 and 15yrs. An exciting walkway comprising of swing bridges and ladders follows a rushing gorge. Easy to escape the hard sections making it an ideal introduction to the world of Via Ferrata.

Difficulty: PD or D depending on route chosen

Distance from Alpbase.com: 10 minutes drive
Great for families with children between 8 and 15yrs. Thee are two variations which split at half height – both are fun and aerial. Remember there is a 30 minute walk-off at the end. This should lead you back to your car but look out for the little Via Ferrata signs on the descent. Leather gloves recommended.

Distance from Alpbase.com: 25 minutes drive
Pretty straightforward traverse above and across La Grand Falaise rock climbing crags. Great scenery and views looking up into the deep cut Freissinieres Valley. Not recommended for children under 10 years.

Total duration up and down: 1.00hrs

Distance from Alpbase.com: 15 minutes drive
Great for families with children from 5 upwards. A good easy introduction to Via Ferrata if have not done one before.

Drive down to L’Argentiere and at the first set of lights in the town turn right, cross a railway line and continue up the steep narrow road to the car park on your left for the Collets crag for climbing. From this car park it is a short 5 minute walk. Once finished follow the path on your right which leads back to the car park, passing a short section of cable to help you.

Pick up the free Via Ferrata and Canyoning guide to the Ecrins Massif at any outdoor equipment shop in the area such as Sport 2000 or Twinner in Vallouise La Casse, L’Argentiere, and Briançon etc. The latest brochures contain all 16 of the Via Ferrata routes and the 5 canyons in the Ecrins.
Maps:
For all of the Via Ferrata and Canyon routes mentioned above maps are nice but not essential. The Ecrins Massif is split into 5 IGN maps at 1:25,000 and can be bought direct on line at www.ign.fr Alternatively relevant maps can be bought at most local newsagents and supermarkets.

For rock climbing many ascents are possible in the Ecrins from late April to mid October. Check relevant websites for details but this area is renowned for its 300 days of sunshine every year – rest days are normally not an option. For high mountain rock climbs the season is mid June to the end of August. Generally you’ll find better weather than Chamonix, and warmer. For weather forecasts try your local tourist offices – good one in centre of Vallouise. Or phone 0892680205

OR if you have a French mobile ring 112

Usually posted up daily outside village tourist offices, and Mountain Guides offices. Or phone Meteo France - 08 92 68 02 05, or just ask us as we get it via the internet and TV.

Many of the local via ferratas can be done from April through to the first snow.

From Wikipedia, the free encyclopedia Via ferrata (the Hermann von Barth Way), on the Partenkirchen Dreitorspitze (Austria) Via ferrata Piz de Lech A via ferrata (Italian for "iron road", plural vie ferrate or in English via ferratas ) is a protected climbing route found in the Alps and certain other locations. The essence of a modern via ferrata is a steel cable which runs along the route and is periodically (every 3 to 10 metres (9.8 to 33 ft)) fixed to the rock.

Using a via ferrata kit, climbers can secure themselves to the cable, limiting any fall. The cable can also be used as aid to climbing, and additional climbing aids, such as iron rungs (stemples), pegs, carved steps and even ladders and bridges are often provided. Thus via ferrata allow otherwise dangerous routes to be undertaken without the risks associated with unprotected scrambling and climbing or need for climbing equipment (e.g. ropes). They enable the relatively inexperienced a means of enjoying the dramatic positions and accessing difficult peaks normally the preserve of the serious mountaineer; although, as there is a need for some equipment, a good head for heights and basic technique, via ferrata can be seen as a distinct step up from ordinary mountain walking. Conversely, the modest equipment requirements, ability to do them solo, and potential to cover a lot of ground, mean that via ferrata can also appeal to more experienced climbers.

Via ferrata can vary in length from short routes taking less than an hour, to long, demanding alpine routes covering significant distance and altitude (1,000 metres (3,300 ft) or more of ascent), and taking eight or more hours to complete. In certain areas, such as the Brenta Dolomites, it is possible to link via ferrata together, staying overnight in mountain refuges, and so undertake extensive multi-day climbing tours at high altitude. In difficulty, via ferrata can range from routes that are little more than paths, albeit in dramatic and exposed situation.

Choose from a wide selection of high quality chalets and apartments ideal for familes and/or groups of friends.

How to find us